Look what I discovered this morning on Amazon when I was looking for a list of my reviews! Rob McConnell of X Zone Radio made my “Haunted Marietta” interview available as a dowload for $.99 ! Now for less than a dollar you can hear how strange I sound on the radio. (At least to myself.) Here’s the link: 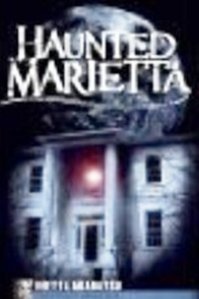 To Serve and Protect: Why It Is So Important to Acknowledge the Existence of the Paranormal

Thanks in part to the proliferation of television program and books about scientific investigation of the paranormal, no matter how flawed they may or may not be, and the burgeoning number of paranormal investigation groups, belief in those things that fit outside the norm is losing some of its stigma.

But this is not happening fast enough, particularly in the case of people who are, or believe they are, suffering a haunting.

In the Certified Paranormal Investigation course offered on the ParaNexus site, Doug Kelley talks about the power of belief. In some cases, people who believe that they are being haunted may be suffering from a pyschological problem, and in some cases, they may be actually experiencing a paranormal event. In the long run, which one of these is true may not make a lot of difference if the person is so afraid of being ridiculed or thought to be crazy that they don’t seek help, or if they are not taken seriously when they do seek help.

In May of 2008, there was an article by Hamilah Abdullah in the Kansas City Star about Sgt.
Brian Rand. The article stated:

“Until the day he died, Sgt. Brian Rand believed he was being haunted by the ghost of the Iraqi man he killed.

The ghost choked Rand while he slept in his bunk, forcing him to wake up gasping for air and clawing at his throat.

He whispered that Rand was a vampire and looked on as the soldier stabbed another member of Fort Campbell’s 96th Aviation Support Battalion in the neck with a fork in the mess hall.

Eventually, the ghost told Rand he needed to kill himself.”

So, Sgt. Rand smoked a cigarette, wrote a note, went to the park where he and his wife married, and shot himself.

“My brother was afraid to ask for help,” said April Somdahl. “And when he finally did ask for help the military let him down.”

Yes, the military did let him down, but I feel that society let him down as well. Because people who claim to be haunted or who profess to believe in ghosts may still be scoffed at, especially tough military men. No one investigated this case, to see if there was evidence that Sgt. Rand really was being haunted by a real vengeful ghost. No one helped him figure out what was going on outside his head and then deal with what was going on on the inside.

If he had felt free to contact a paranormal investigation group, and was lucky enough to get one that would not only seek to capture a ghost but would seek to help, what difference might it have made to him? If he could have been in contact with a parapyschologist, who could have helped him deal with his guilt and pain and deal with this haunting, whether it was external or internal, what difference would it have made?

Even if he had gotten military help to seek normal psychiatric treatment, if the person treating him did not take the possibility of a real haunting seriously, and this was a real ghost, would it have helped?

How many people are suffering unnecessarily because they don’t know who to turn to, or are ashamed to turn to anyone, or are too afraid that they are losing their minds to dare ask for the help they need?

Imagine living every day in a house where unexplainable things happen all the time, and being afraid to tell anyone. What if your parents, your school, or your church are telling you that to believe in these things is wrong, but they’re happening right in front of your eyes? How is that going to make you feel?

What relief would it be to find someone who actually believed you, listened, and tried to help in a concrete fashion?

That is why we need to keep on getting out there and gathering the evidence and talking about what we do. We need to keep responsible, serious paranormal investigation in the public eye, so that if a person has had an experience they can’t explain and can’t handle alone, whether it is a ghost, a UFO encounter, or an encounter with some unknown creature, that person will know where to go for help and will not be shamed or scared out of doing so.

Recent Posts: Eye on the Blues- Roots and Branches

Rhetta Akamatsu  Atlanta blues man Eddie 9V is set to release Little Black Fies on Ruf Records May 28. While this is not Eddie ‘s first record, it is his first for an established record label. It was produced at Atlanta’s Echo Deco Studios  Eddie’s brother, Lane Kelly. Even though he is only 24 years […]